The House of Morris Marks: A Preservation Story

In 1880 when Portland shoe merchant Morris Marks and his wife Annie built a new home at 1134 S.W. 12th Avenue, he probably didn’t imagine the house would ever move. The home was designed by Portland architect Warren Heywood Williams in an Italianate style, of which there are few remaining examples in Portland. Williams would eventually design another larger Italianate-style home for Marks, which now sits at 1501 S.W. Harrison Street and is on the National Register of Historic Places. 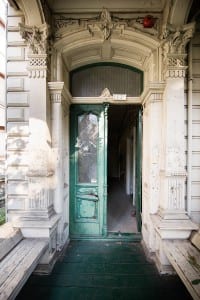 Door of Morris Marks Home before the move. Photo by KLiK Concepts.

Downtown Portland grew in density around the home on 12th Avenue, and over time the home was dwarfed by newer apartment housing and in the 1990s, boarded up for more than a decade while the owners considered its future. When a demolition permit application was filed in 2016, Portland preservationists—who were aware for many years that the house was in jeopardy—went into action to save the home.

Owners Steve and Sue Blindheim patiently worked with preservationists over many years and eventually made an agreement with AHC board member Rick Michaelson and Portland development consultant Karen Karlsson to sell the home to them for $1 if they could come up with a plan, and the funds, to move it.

This started an arduous process of working with the City and Portland State University to find an appropriate new location for the house and negotiating the permits and planning for actually moving the house. 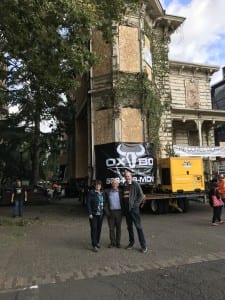 Several longtime AHC Board and Board of Advisors members—architect William J. Hawkins, FAIA, historian Tracy Prince, Ph.D. and longtime civic activist Bill Failing—led the Save the Morris Marks House Committee. City officials and Portland State University worked with Karlsson and Michaelson through the necessary permitting related to moving and relocation. “Everyone was supportive of preserving this house,” says Michaelson. Portland Water Bureau property was secured as the landing spot for the home, the city waived development fees for the land, and access for the move across the Portland State University campus was granted. A move date was set for September 30, 2017. 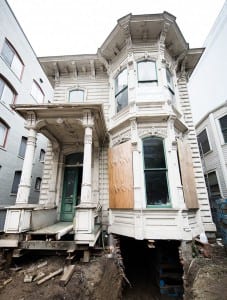 Lifting the Morris Marks House for the move. Photo by KLiK Concepts.

Moving the house through downtown required cutting it into two large pieces, and carefully piecing it back together at the new site atop a new foundation. Despite being empty for nearly two decades, the house remains structurally sound. As contractor for the project, local design firm Arciform was responsible for disassembling and reassembling the house. Arciform is managing the entire structural rehabilitation of the house and is overseeing its renovation with a commitment to preserving original features and materials. When the renovation work is complete, the house will be adaptively re-used as office space.

A chance to view this historic gem

While the house is still only partially renovated, Karlsson, Michaelson and Arciform have agreed to allow the home to be viewed during The Old House Revival Tour in what might be its only public opening. The exterior and significant portions of the interior will be available to tour registrants. Take advantage of this unique “hard hat” tour opportunity, along with a chance to see other wonderful homes of other eras on the tour. If you are not already a member, this is a great time to join and receive a discount on tickets for this event and many others throughout out the year. Purchase tickets on our website.