June 17, 2020 – One of the most significant collections of architectural artifacts in the western United States is now under one roof. 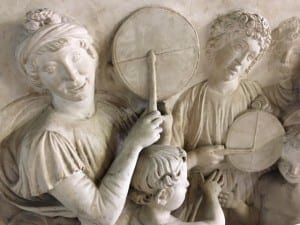 Frieze panels from the AHC collections were donated to Portland Public Schools to be installed in the renovated Lincoln High School.

AHC’s collection consists of thousands of building pieces salvaged by Jerry Bosco and Ben Milligan, who established the Bosco-Milligan Foundation and donated their collection for public benefit. Until recently, the collections were housed in two different locations. But this month, longtime Collections Curator Doug Magedanz led a move that consolidated the AHC collections into a warehouse in SE Portland. This has long been a goal for the AHC, and we are thrilled to be able to accomplish this move, even during these uncertain times.

Bench from the Fox Theater, donated to Oregon Black Pioneers.

Oregon Black Pioneers received a bench from the old Fox Theater that was originally used as as segregated seating in the theater. Thank you to the Rebuilding Center for providing volunteer support for the move. Thanks also to O’Neill Transfer and Storage for help with the move!