Can Parkway Manor Apartments be saved? 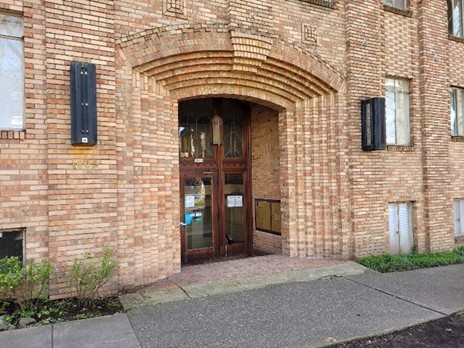 Parkway Manor Apartments/Residence Hall is one of the few significant historic buildings remaining on the PSU campus. For almost a century it has been a valuable neighbor contributing to the defining character of the South Park Blocks, an important historic public place now listed on the National Register of Historic Places.

Parkway Manor is one of four apartment buildings built on the west side of SW Park Avenue for developer Harry Mittleman. Between 1926 and 1931, Mittleman built the Queen Louise (1926), Blackstone (1930), Jeanne Manor, and Parkway Manor (both finished in 1931). The last of the four to be completed, Parkway Manor opened in the spring of 1931 as Portland sank into the depths of the Great Depression.

Mittleman’s four Park Avenue apartment buildings all offered slightly different versions of “modernistic” architecture – what we usually call Art Deco or Zig Zag Moderne today, yet from the outset all of Mittleman’s apartments were regularly advertised as “exclusive, but not expensive”. In the 1930s Mittleman even offered weekly rentals, ostensibly for those just passing through Portland looking for work or simply unable to pay an entire month’s rent at one time. In this sense, Mittleman was providing affordable housing with the latest conveniences.

Of the four apartment buildings, all but the Jeanne Manor were eventually acquired by Portland State University. The oldest one, the Queen Louise, was demolished in 1969 and in 1989 that property became home to an addition to the PSU Library.

The AHC is concerned about the pending demolition of this building and can recommend experts with architectural and preservation experience to help assess a new future for this building. Read our letter to PSU.