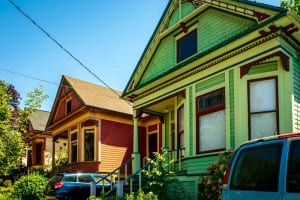 July 24, 2018 – Portland’s city planners have recently delayed a decision on a proposal aimed at increasing density in residential neighborhoods and largely eliminating single-family residential zones throughout most of the city. If approved as proposed, the plan would allow duplexes, triplexes and possibly even four-plexes in single family zones, plus accessory dwelling units.

The proposal is called the Residential Infill Project.  The Portland Planning and Sustainability Commission is reviewing the complicated proposal in June, and is expected to forward it to the City Council for consideration sometime this summer.

The plan attempts to reduce the prospect of oversized “McMansion” houses by limiting total square footage of new houses to approximately 3500 square feet on a 5,000 square foot lot.  Larger houses would be allowed on larger lots.

The AHC’s advocacy committee has been working with the Portland Coalition of Historic Resources to express concerns about the RIP proposal.  Issues include potential loss of yards, setbacks and trees, plus apparent incentives to demolish older, smaller houses to make way for triplexes and larger homes.  There also are concerns that implementing the plan would have adverse impacts on tenants who rent many of the city’s smaller houses.

Current R-5 zoning allows for one house of a 5,000 square foot lot.  The “housing opportunity zone” that is proposed in RIP would lay over most R-5 zones to allow duplexes and triplexes, thus largely eliminating the significance of the underlying R-5 zone.  Some residents in West Portland are concerned that higher density is not appropriate in neighborhoods without sidewalks and with poor streets.