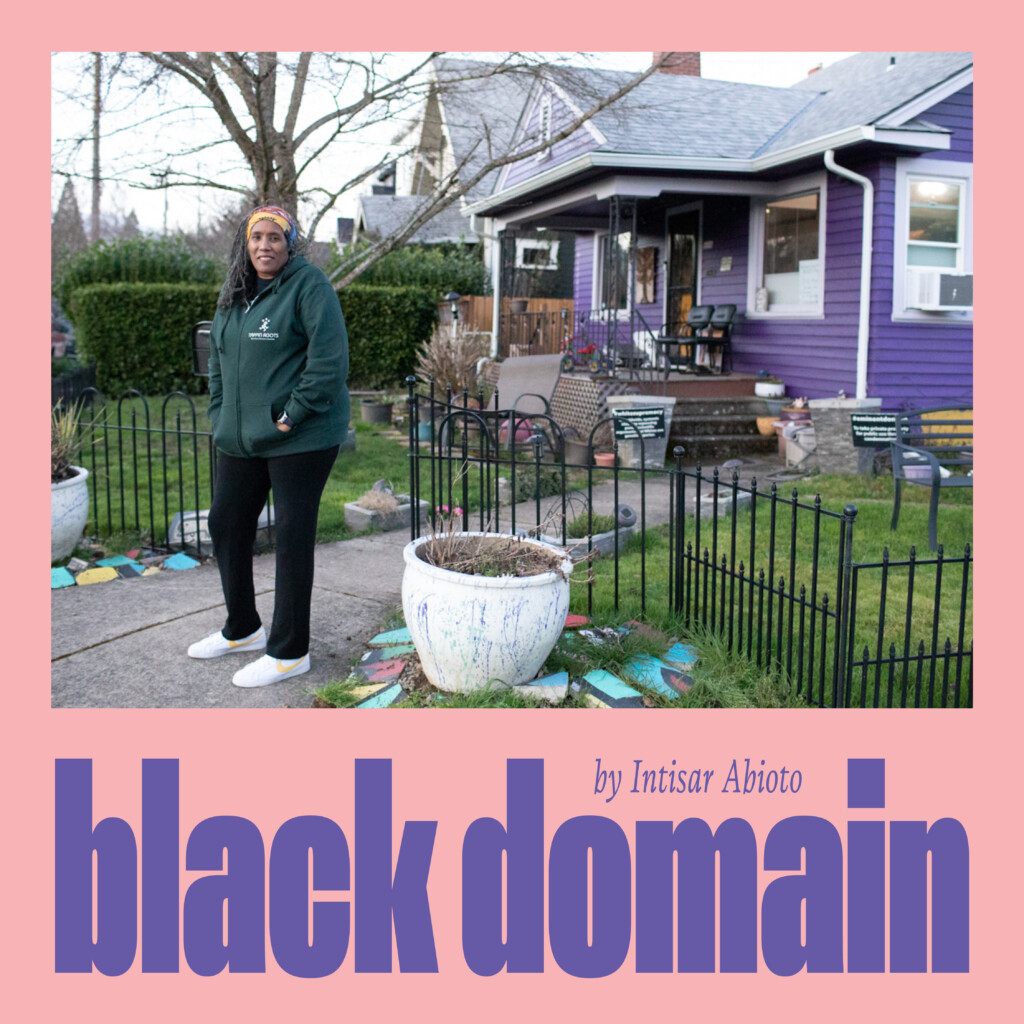 Black Domain, a photographic exhibit by Portland-based artist Intisar Abioto, explores places of home, worship, creativity, and healing through environmental portraits of Black Portlanders and Oregonians. Focusing on sites of architectural, cultural, and historical relevance to Black communities, Abioto’s photographs capture the spirit of Black domain as sanctum, rejuvenation, and liberation experienced by generations of Black people in Portland and in Oregon.

The exhibit is a visual complement to the Bosco-Milligan Foundation/Architectural Heritage Center’s research, documentation, and advocacy about places of Portland’s Black history as well as the many community histories about Black place. In this project, Abioto documents, through her eyes, the homes, small businesses, community centers, and other sites whose deep cultural meaning illuminates their architectural significance.

Organized by the Architectural Heritage Center, Black Domain is the largest solo exhibit to date of the work of Abioto (b. Memphis, 1986), a multidisciplinary artist who works across photography, dance, research, and writing. Recently featured in The New York Times, she helped document places of historic relevance to Portland’s Black communities, a project accepted into the National Register of Historic Places in 2020. 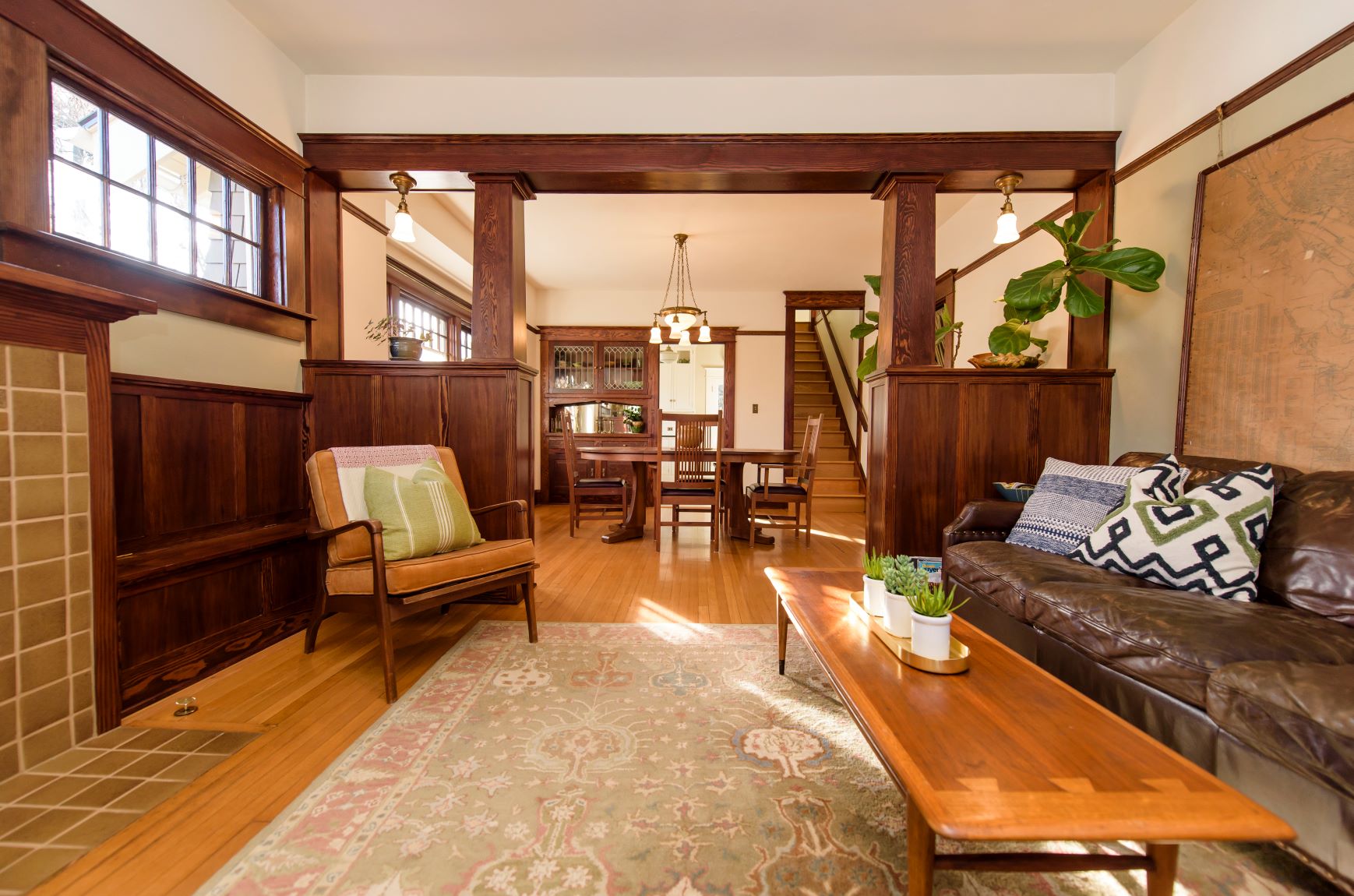 Old House Revival: An Exhibit  features an array of photos of historic home remodels from various home styles dating from the late 19th century to the mid-20th century. The images are drawn from two decades of AHC home tours. You can also find historic samples of paint color, flooring, fixtures and more. Explore ideas for the interiors of common historic home styles in Portland, from Victorian to Craftsman Bungalow to Mid-century.
You can also view our online Home Tour Showcase. 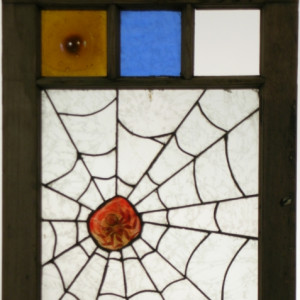 Select works from the AHC’s collection of architectural artifacts are on view the M.J. Murdock Classroom. This showcase features stained glass and historic signs salvaged from former businesses throughout the city. 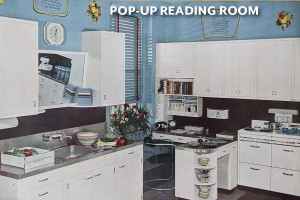 The AHC has transformed our storefront gallery into a pop-up reading room with curated works from the AHC library. To complement the Old House Revival exhibit, the pop-up library contains books, catalogs, and periodicals with information on historic plumbing fixtures, wallpaper, hardware, lighting, and more! This is a chance to explore what’s in our library archives without an appointment.

South Portland and the Long Shadow of Urban Renewal 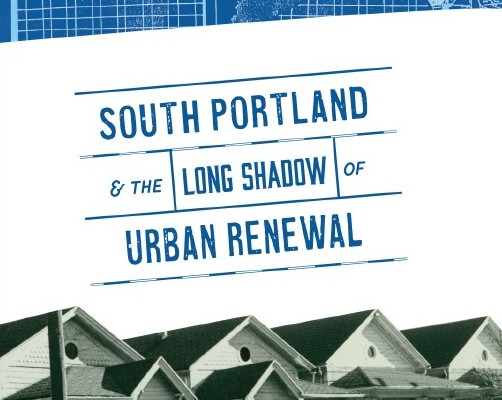 In 2020, a section of Portland near the Willamette River and south of downtown was re-designated as the city’s new “South” quadrant, mostly aimed at making it easier for people to navigate the area. This designation alludes back to an era in the first half of the last century when this area and the surrounding neighborhoods were part of the city’s most ethnically diverse community—and commonly referred to as South Portland.

This exhibit looks at the logic and motivations of city leaders, beginning in the 1950s, whose redevelopment efforts focused on the future at the expense of the city’s past and present. These ambitions and impacted residents, businesses, and property owners in one of the city’s most diverse neighborhoods. But it also steered a stagnant, conservative city toward a modernist and meticulously planned aesthetic.

Today, a portion of the former urban renewal area is a National Register Historic District while nearby, what remains of the old neighborhood survived decades of change and is also designated historic. South Portland and the Long Shadow of Urban Renewal shows how new places can eventually become historic, while also shedding light on some present-day aspirations for the city that may transform the area once again.

Learn more about the history of South Portland in our online series.

This exhibit is presented with generous support from the Oregon Heritage Commission and the Cathy Galbraith Educational Endowment.

Companion exhibit
The Oregon Jewish Museum and Center for Holocaust Education (OJMCHE) is presenting a companion exhibit on the famed landscape architect Lawrence Halprin, opening June 23. As part of South Portland’s urban renewal, the Portland Development Commission invited Halprin to design a series of fountains downtown, which is now the renowned Portland Open Space Sequence. OJMCHE and AHC members will receive free reciprocal admission to both the Lawrence Halprin and South Portland exhibits. 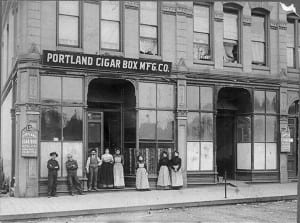 This original AHC exhibition on the historic city of East Portland focuses on the period from the 1840s to the 1910s. It explores the people who lived there, the impact of the arrival of the railroad and industry, and the changing landscape that in the course of only a few decades turned a flood zone into a thriving city.

What we think of today as Portland covers a broad swath of land on both sides of the Willamette River. In the late 19th century, that same area contained several mostly independent communities, including Albina, St. Johns, Sellwood—and East Portland, a small city on the eastern shore of the river roughly bounded by Division Street to the south, 12th Avenue to the east, and Sullivan’s Gulch to the north. While people had lived in this area for far longer than recorded history, East Portland only existed as an official city for two decades before merging with Portland and Albina in 1891. Learn more in this Lost Oregon blog post. Or read the story of the lost city of East Portland here.

Exhibits presented with support from The Jackson Foundation and the BNSF Railway Foundation.

Practical and Artistic:
The Life and Work of Architect Charles Howard Kable 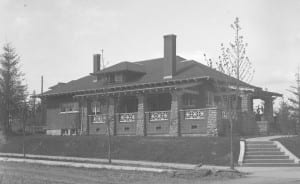 Charles Howard Kable moved to Portland in 1905 from Illinois a few years after he completed his architecture degree at the University of Illinois. He spent over four decades working on buildings in Portland and around Oregon. He worked on projects ranging from the well-known, like an additional to the Meier & Frank Department Store in downtown, to modest small town banks and residences throughout Portland and beyond.

Support for this exhibit comes from Charles Reifsteck, architect in Illinois who is a member of the same college fraternity as C. Howard Kable, and from Charles Howard Kable’s granddaughter, Mollie Hunt. In 2013, Mollie generously donated and allowed us to scan a collection of C. Howard Kable’s papers, photos, and glass plate negatives. It is this collection that made the exhibit possible and that has shed new light on Kable’s work in Portland and beyond. 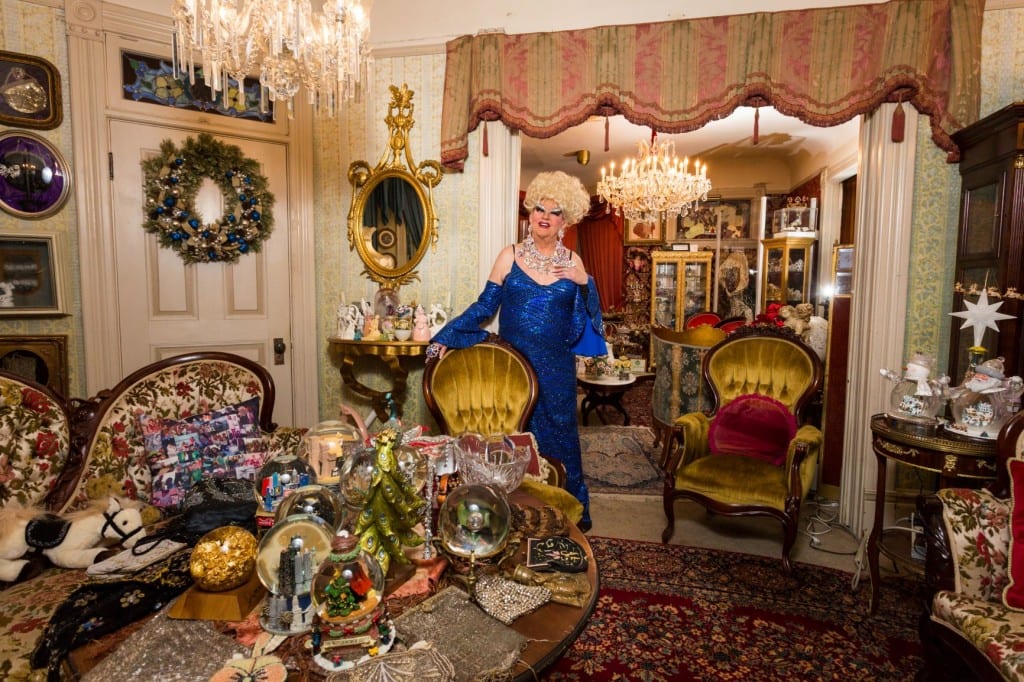 The Artistic and Eclectic Will Martin: Selected Works, 1957-1985 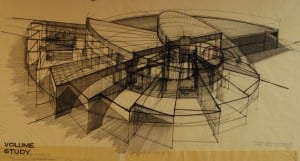 This original exhibition about the Portland and Oregon architect Will Martin (1930-1985), best known as the lead designer of Pioneer Courthouse Square, captures the full range of Martin’s creative and unconventional work as an architect, artist, and imaginative thinker. The exhibition demonstrates the vibrant fusion between art and architecture as it played out in Martin’s built and unbuilt work across the eras, from his earliest structural explorations in the late 1950s and 1960s, his modernist commercial and residential work integrated with natural landscapes, and his embracing of postmodernism prior to his untimely death in 1985. Drawing on the AHC’s holdings and loans to display some work publicly for the first time and other work for the first time in more than twenty-five years, the exhibition presents the breadth of Martin’s output, including rough sketches and renderings, architectural models, paintings, and sculpture, to show how Martin’s wide-ranging interests, from botany and the environment to local history and humor, found expression in his projects. The exhibition is a close look at an architect whose work and career can be reassessed thirty years after his last built project.

The exhibition was generously supported by the Graham Foundation for Advanced Studies in the Fine Arts, the James F. and Marion L. Miller Foundation and the Rose E. Tucker Charitable Trust.

The Presenting Corporate Sponsor for the exhibition is Soderstrom Architects. 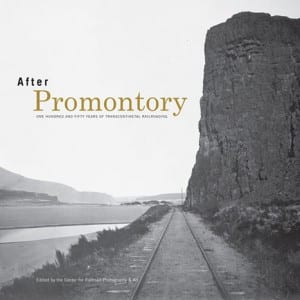 After Promontory: 150 Years of Transcontinental Railroading

To mark the 150th anniversary of the beginning of this era, the Center for Railroad Photography & Art (Madison, WI) launched a special project, After Promontory: 150 Years of Transcontinental Railroading. This initiative includes a traveling exhibition that examines the significance and lasting impact of the transcon­tinental railroads on the American West. The AHC is currently the only venue in Oregon where the exhibit will be shown.

The exhibition features photographs by some of the most ac­complished photographers in the nation’s history, artists such as William Henry Jackson, Timothy H. O’Sullivan, and Car­leton E. Watkins. These images illustrate how railroads profoundly reshaped the human geography of the West. 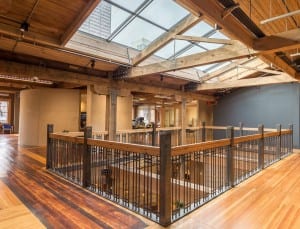 Unreinforced Masonry (URM) buildings present a challenge for earthquake-prone communities. There are over 1,650 URM buildings in Portland and millions around the world. These structures are important historic, architectural, cultural, and economic landmarks, but their vulnerability to earthquakes imperils these buildings and the people in them. The AHC presents this exhibit from a recent URM Seismic Resilience Symposium held in Portland. The series of panels showcase award-winning seismic upgrades to historic structures in Portland and elsewhere. 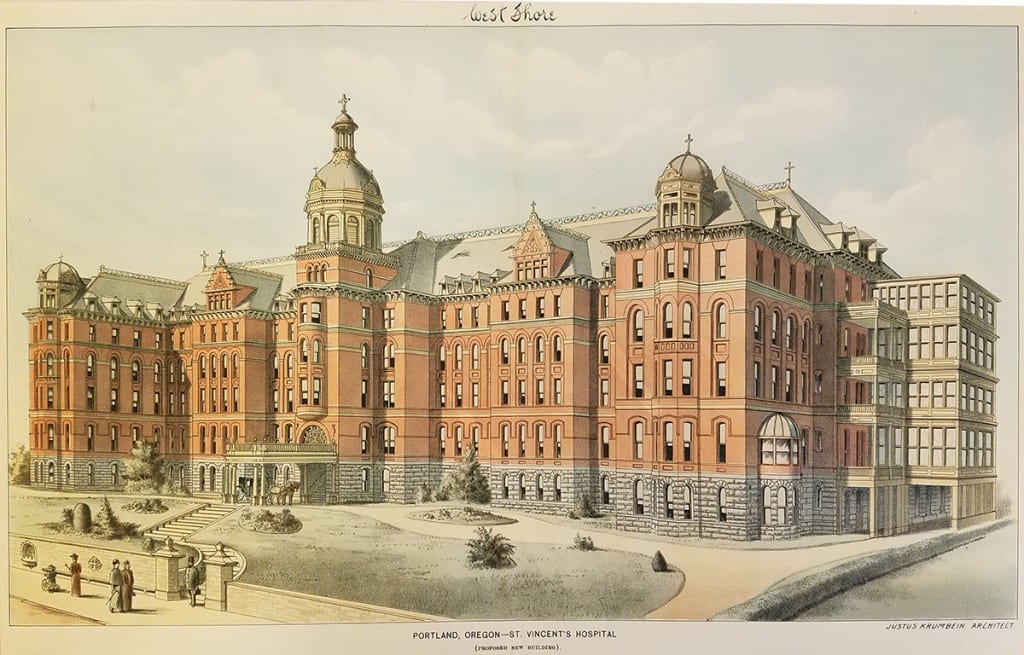 This display of imagery is predominantly from The West Shore magazine, published in Portland from 1874-1891 by German immigrant Leopold Samuel. In 1878 Samuel began adding lithographic illustrations to the magazine – artwork that was produced by the West Shore’s own in-house artists from drawings and photographs of buildings throughout the Pacific Northwest. The West Shore was not alone in creating this type of imagery: Harper’s Weekly and the Oregonian Newspaper are also represented, as is the work of artist Rockwell Carey.

All of the prints on display were generously donated to the AHC by Bill Hawkins in 2013.

Selling the Rose City: Portland Souvenirs and the Imagery of Place 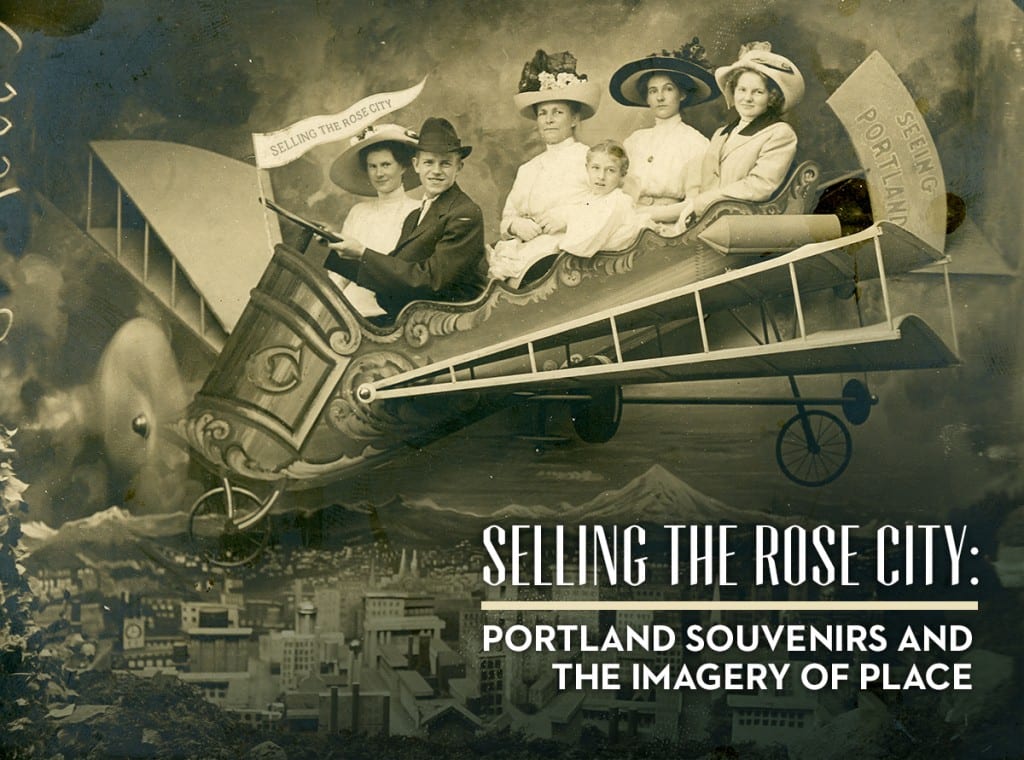 Part historical journey, part nostalgia, and part kitsch, Selling the Rose City presents material objects that for more than a century have promoted and celebrated Portland as a place. From hotel stationery to buttons, pocket mirrors to ashtrays, snow globes to games, this exhibit shows how items of all kinds have been used to “sell” the city and its architecture. Selling the Rose City explores this topic by looking at the earliest examples of Portland souvenirs, the rise of the mailed postcard, how real estate speculation and civic boosterism were bolstered through objects, the 1905 Lewis & Clark Exposition and the explosion of Portland mementos, and the marketing of Portland’s built spaces to the public today. Whether known as the Rose City, Stumptown, Portlandia, or by another moniker, Portland over time has been Selling the Rose City with a visual buffet of objects and ephemera.

Selling the Rose City is presented with support from AHC members. The exhibit is curated by Val Ballestrem, AHC Education Manager, with exhibit construction by Doug Magedanz, AHC Collections Curator.