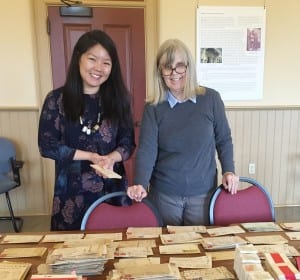 Jackie Peterson-Loomis and Jennifer Fang in 2016 sorting through Chinese-American history items owned by Jerry Bosco and Ben Milligan, which the BMF/AHC subsequently transferred to the Portland Chinatown Museum for its use.

We’re very happy that BMF/AHC Board Member Jacqueline Peterson-Loomis, Ph.D. is being awarded the Historic Preservation Award as part of the NW Examiner Community Awards. Jackie, who serves on both our advocacy committee and exhibitions/collections committee, has been a strong advocate for many years for the New Chinatown/Japantown historic district.

Jackie, who is currently Executive Director of the Portland Chinatown History Foundation, has long focused her work on the history of various ethnic and cultural groups. She was a professor of history at Washington State University for nearly two decades. She has curated numerous exhibitions and published many works on the various American Indian tribes and Portland’s Chinatown/Japantown. She has also produced videos and other multimedia projects related to these subjects.

Recently Jackie curated the popular exhibit Beyond the Gate at the Oregon Historical Society as part of an effort to document and share the stories of Portland’s Chinatown. She continues this work at the Portland Chinatown History Foundation, whose new Portland Chinatown Museum is opening this year.

Jackie will receive the award at a ceremony on May 5. The NW Examiner Community Awards is in its 24th year, and the historic preservation award winners have made significant contributions to the region. The awards ceremony is open to the public. No reservations are required.