January 6, 2021 – After 10 months of detailed research and writing by volunteers and AHC members, a nomination aimed at listing the South Park Blocks on the National Register of Historic Places has achieved its first major milestone. 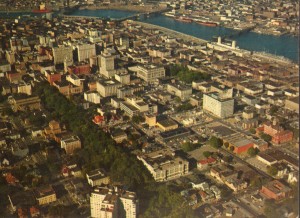 1950s postcard with an aerial view of the South Park Blocks. AHC Library.

The 100-page nomination submitted by the Downtown Neighborhood Association has been accepted for consideration by the State Advisory Committee on Historic Preservation in February.

If supported by the state committee and by the Portland Landmarks Commission, the nomination would be sent to the U.S. Department of Interior for final consideration and probable listing on the National Register.

“This park is such an obvious landmark for Portland, it is long overdue to correct an obvious oversight,” said Story Swett, a Portland architect who played a major role in preparing the nomination form.  “A formal designation may help motivate retention of this valuable public space.”

The 12 blocks, extending from S.W. Salmon to Jackson Mill Streets between S.W. Park East and S.W Park Avenue West are among the oldest public spaces in Portland.  They were donated by pioneer entrepreneur Daniel Lownsdale in 1852, and were landscaped in 1877 under the direction of horticulturalist Louis Pfunder.  Pfunder’s basic design, still clearly evident on many of the blocks today, included five parallel rows of deciduous trees – mostly elms – above a carpet of grass and flower beds.

The Downtown Neighborhood Association over a year ago began discussions that led to the nomination effort.

Wendy Rahm, an AHC board member and chair of the Downtown Neighborhood Association’s land-use committee, managed the volunteer project.  AHC member Brooke Best did much of the research and writing, in association with Swett.  Leslie Hutchinson, a former AHC board member, assisted with the research.

Citizens have until Jan. 18 to submit comments in advance of the State Advisory Committee’s hearing.  Comments can be submitted by mail to:

or by email at:

Comments to the Portland Landmarks Commission can be sent to: