The area we now call South Portland had its own unique character before the city took on its first Urban Renewal project that transformed this neighborhood. As companion series to our current exhibit, South Portland and the Long Shadow of Urban Renewal, here’s a brief history of the area, based on a previous AHC exhibit written by Carl Abbott. The story will be told in segments. 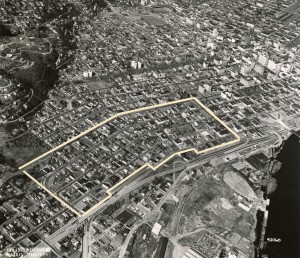 There was never a formal, official definition, but Portlanders at the start of the twentieth century knew where to find South Portland. It ran from Columbia Street at the north down as far as Curry or Gaines, where the hills squeezed close to the river and pinched South Portland off from Fulton further to the south. The eastern edge was the industrial corridor along the Willamette. The western edge followed the South Park blocks south from the old Lincoln High School on Broadway and then curved around the base of the hills. First Avenue was a major axis with a streetcar line and bridge across Marquam Gulch. So was Fourth Avenue with its Interurban rail line that continued along what became Barbur Boulevard in the 1930s. The southern end was a bit less clear—certainly to Gaines Street and perhaps as far as Abernethy.

In 2020, the City of Portland readdressed a section of the city near the west side of the Willamette River, between the Hawthorne Bridge and the Lake Oswego border. All properties in this area that are east of Naito Parkway or View Point Terrace are now officially part of the newly designated South Portland.

South Portland was a neighborhood for Jewish families who had recently arrived from the Russian Empire and elsewhere in Eastern Europe.

South Portland was a neighborhood for Italian immigrants, many of whom arrived as single men.

South Portland was an extension of the Skid Road district where unattached working men and women lived in cheap hotels and rented rooms.

When immigrants arrived in an American city in the years between 1840 and 1940, two questions influenced their choice of neighborhood. Where could people with little money afford to live? Where could they have easy access to the greatest range of low-skilled and entry-level jobs? 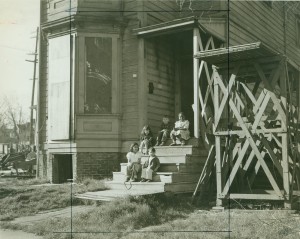 In Portland, this meant that immigrants clustered in greatest numbers at the northern and southern ends of downtown and also in districts close to riverside industry on both sides of the Willamette.

South Portland in the early twentieth century overlapped two of Portland’s ten wards—Ward Five between Jefferson and Caruthers Street west of the Willamette River and Ward Six south of Caruthers. The 1910 census, taken at the very peak of European immigration to the United States, counted 4,718 foreign-born residents in Ward Five, 647 of them from Italy and 654 from Russia. Census takers found 2,729 foreign-born in Ward 6, 445 of them from Italy and 675 from Russia. The American-born children of these newcomers reinforced South Portland’s distinctive ethnic character. 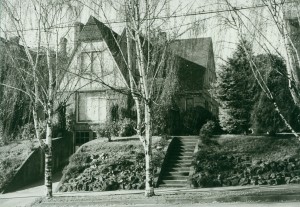 South Portland’s Italian community dates to the last quarter of the Nineteenth Century. The 1880 census found sixteen Italian men living in boarding houses on Second and Third Avenues, and the following decades brought additional Italian newcomers to take the place of earlier German and Irish immigrants.

A generation later, the Italian community was increasingly anchored with real estate ownership. Polk’s City Directory listed at least 27 property owners in South Portland in 1907 with identifiably Italian names and 45 in 1931. Most of them owned houses in the compact set of blocks between Lincoln and Sheridan, from Front to Sixth.

A rich set of institutions and businesses served the community. Men could join the Manzini Society and the Christoforo Columbo Society. Immigrants whose Italian was better than their English could read about local events and news from the old country in La Tribuna Italiana. Families could trek to the Columbia Theater (First Avenue between Clay and Columbia) for Italian language films or do the shopping at Jachetta’s Italian Delicatessen and Garibaldi Grocery. Everyone could worship at St. Michael the Archangel, built by and for the Italian community at Southwest Fourth and Mill. Built in 1901, the church remains a neighborhood landmark.

Many residents of South Portland lived on the economic edge, toiling in factories or operating small, vulnerable businesses whose customers were often their own neighbors.

Here’s how Italian immigrants made their living in 1900: The most common occupations identified in the census were day laborer and bootblack—both jobs with marginal wages and zero job security. Railroad laborers could hope for employment month to month rather than day to day. Gardeners, dressmakers, and vegetable venders lived from customer to customer. Further down the list, quarrymen had skills from “the old country” that might earn them decent wages.

One way to escape the world of daily wages was to open a small business, often to supply the wants of your compatriots. There were bakeries, Jewish delicatessens, Italian groceries, pickle makers, repair shops, wine merchants, saloon keepers and liquor dealers.

The smallest of small businessmen were the South Portlanders who peddled goods out of horse drawn wagons. Italians were often peddlers of fruits and vegetables, some of them grown by Italian market gardeners. Jewish peddlers were more often found in the junk trade (we might call it recycling now). They stabled their horses in neighborhood barns and in Marquam Gulch before it was filled in the 1930s.

With the industrial waterfront nearby, it was no surprise to find union halls scattered among the single room occupancy hotels and second hand stores in the neighborhood’s northern blocks. The Boilermakers Building Association was at 1313 SW Third. The Steam and Maritime Fitters were at 310 SW Columbia and the Sailors Union at 211 SW Clay. Housing AFL-CIO unions in the 1950s, the Portland Co-operative Labor Temple was at 1316 SW Fourth on the margin between downtown and South Portland.