The Johnnie Walker sign is now part of the AHC collections

In the early days of the automobile boom, service stations specifically geared toward batteries and electrical components were commonplace. Johnnie Walker Inc. operated out of a then new building still standing at NW 9th & Everett, sharing the space with the Willard Storage Battery 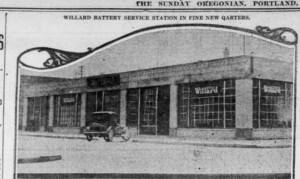 Co., an early manufacturer of automotive batteries based in Cleveland, Ohio. Within months, a new company named Harper-Burg was set up specifically to service Willard brand batteries, taking over Willard’s northwest Portland operation while also absorbing Johnnie Walker’s business. Walker became manager of the new enterprise and in 1921, he moved on to become manager at Harper-Burg’s new service station at SE 12th & Hawthorne (demolished prior to 1950). 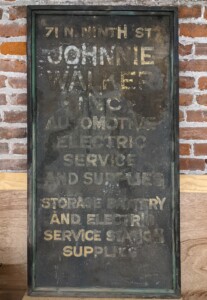 This sign for Walker’s short-lived business was found in the garage of a home in the Sabin neighborhood of northeast Portland. The family that once owned the house ran a second-hand and scrap business with no known association with Johnnie Walker. We’re not sure what happened to Johnnie Walker, but he and his wife Maude lived in Portland until at least 1935.

Thank you to Gary Logue for donating the sign!