March 2022 – The Architectural Heritage Center/Bosco-Milligan Foundation is greatly concerned about the destruction of the David P. Thompson Elk Fountain, one of Portland’s most cherished artworks and a city designated landmark. We, like many thousands of Portlanders, want to see the fountain restored to the historic location where it was placed 122 years ago. 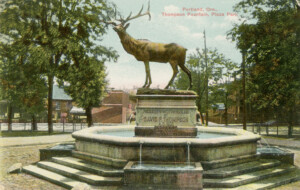 Postcard image of the Thompson Elk Fountain. The plaque reads: “$10 reward at Water Office City Hall for information resulting in arrest and conviction of any person injuring this fountain or putting anything in the water.”

Although public hearings may not occur for a few months, we urge Portland residents to express their concerns promptly to City Council members using the email addresses at right.

A drawing prepared by the Portland Water Bureau (July 2020) for the “Elk Fountain Salvage”  included “X’s” denoting pieces to be demolished as part of its dismantling. A total of seven granite pieces–including the fountain’s four horse troughs–were destroyed using a sledgehammer. It’s not clear what parts of the four horse troughs, if any, were saved. We know that these elements can be refabricated, based on historic documentation and possible existing fragments.

The destruction of the four water troughs as integral parts of the fountain was and remains a direct violation of the city’s requirement for Historic Resource Review prior to any alterations of a Historic Landmark. In view of this, the City bears responsibility for the cost of full restoration of the fountain at its original site and orientation.

It should be recognized that both the fountain and statue are considered a single entity that is a designated Portland historic landmark. Both are owed protections granted by state and city regulations. As a result, the city bears an obligation for the protection and restoration of the statue, as well as the fountain.  We note that news media has reported the city’s intention to restore the elk sometime in 2023, yet there was no mention of the fountain.

Given public concerns about the much-needed recovery and revitalization of downtown, it is urgent that the City restore and burnish the now wounded treasures like the Thompson Elk Fountain to help bring healing and a sense of hope and restoration to its people.

The city recently applied for a 120-day “demolition delay notice,” which effectively aims to erase the landmark status of the fountain so it can be destroyed. We believe this is a mistake, compounded by the fact the city already pre-emptively destroyed the fountain’s physical integrity.

We encourage the mayor and city commissioners to assure that the Thompson Elk Fountain, as a single and complete entity, is preserved, and that the public is given the opportunity to be actively engaged before the matter arrives on the City Council agenda. This iconic piece of Portland history and major work or art deserves thoughtful, careful attention rather than the brutal treatment it has received from the city government.

Read the response to this blog from the office of Mayor Ted Wheeler.

If you support the beauty of the fountain and its historic status, please alert these members of the Portland City Council.