For Valentine’s Day, I wanted to find the most romantic house in Portland. Instead, the houses described below tell the love story of a couple who salvaged Portland’s architectural history. 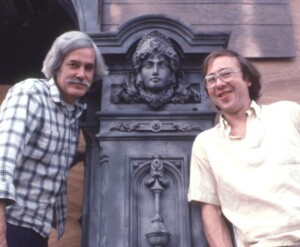 Longtime fans of the Architectural Heritage Center may know that it is owned and operated by the Bosco-Milligan Foundation, but many newbies like me don’t know much about Jerry Bosco and Ben Milligan. They met in 1964 through their shared interest in collecting and vintage items. Jerry, a native Portlander, was 26 and about to begin teaching at Franklin High School; Ben, 27, was born in Texas and was still exploring careers.

The Houses at 33rd and Belmont

In 1965, Jerry and Ben bought their first house together at 913-15 SE 33rd Avenue. The 1890s Victorian-era duplex cost $11,000. Like most couples tackling restoration of old houses, Jerry and Ben painted, sanded, and developed new skills. But unlike the average homeowner, their craftsmanship grew to include hardware reproduction, repairing plaster ceiling medallions, and restoring vintage stained glass. Within a few years, they opened a business called Victorian Facades for other homeowners restoring houses as well as decorators and designers. Jerry and Ben didn’t just offer advice on repair and restoration; they are best known as collectors of architectural pieces including doors, iron work, stained glass, plasterwork, and hardware. They salvaged architectural elements from houses and commercial properties that were being torn down throughout the city. The 1960’s and 1970’s were a transformational time in the landscape of Portland. Urban renewal and large-scale civic building projects promised new freeways, civic centers, shopping malls, and high rises–at the cost of tearing down existing buildings and communities. Some of these buildings and houses contained treasured architectural craftsmanship and Jerry and Ben rescued everything from large-scale arches to small doorknobs. They bought some pieces and salvaged others climbing through properties being torn down just ahead of the wrecking ball. 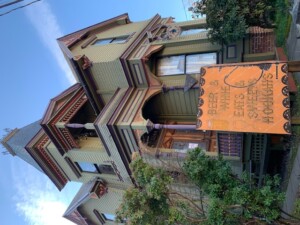 Their collections grew to include houses as well as house parts. They bought 3244 SE Belmont, next door to the Victorian duplex, for their business Victorian Facades and their growing collection. It was 1968 and they only paid $5,000 for the house because it had recently survived a fire. This Victorian is best-known to Portlanders for its post-Bosco and Milligan life as the legendary Pied Cow Coffeehouse. The garden patio was strung with white Christmas lights years before that became mainstream and a generation of locals and tourists have spent evenings there enjoying coffee, pastries, and the hookah lounge. The place always had a cool vibe; Eden Dawn and Ashod Simonian list it in The Portland Book of Dates, Adventures, Escapes and Secret Spots as one of the places that typifies Portlandia Quirk. Like many businesses, the Pied Cow had a Go-Fund-Me page up to help survive the economic impact of the pandemic. A sign in the window says they are seasonally closed and will re-open in 2022.

In addition to the delightful future home of the Pied Cow, Jerry and Ben collected a few other vintage homes in the area of SE 33rd and Belmont and SE 32nd and Morrison. They rented these properties and also used them to store their expanding collection of salvaged materials.

Jerry and Ben collected stained glass windows from the famed Oregon Povey Brothers glass studio of the late Nineteenth and early Twentieth century. Over the years, they repaired and restored windows as part of their business and found that the sheet glass they needed for this work wasn’t available. So they began blowing glass and making their own sheet glass. Their first glass business, Genesis Glass, was located in the old Davidson’s Bakery building at NE 22nd and Irving Streets. In 1975, they purchased the building West’s Block at 701 SE Grand and this became the home of their new glass business Westblock Glass. They renovated the front facade of the building, which previously housed a biker bar, and applied for listing on the National Register of Historic Places. This designation was granted in 1980. Fans of the Architectural Heritage Center will recognize this building as the home of AHC. Come visit and you might see the old Davidson’s Bakery sign hanging on the AHC walls today! 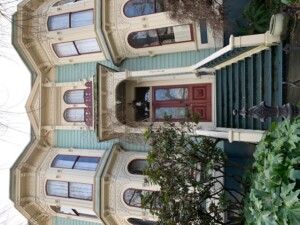 It was a final home in NW Portland in the storied Nob Hill neighborhood that lured Jerry and Ben across the river. It’s a confection of a dream house. The description on the National Register designation notes, “A well-preserved example of the High Victorian Italianate style of architecture, it is one of only twelve ‘symmetrical bracketed villas’ remaining in Portland, Oregon.” Built in 1885 on the land claim of Captain John Couch in what would become Nob Hill, it is the second oldest house in that neighborhood, after a schoolhouse built by Couch in 1884 (2063 NW Hoyt) that was converted to a residence. The ornate carpentry balanced by the symmetrical restraint of the house at 2134 NW Hoyt would appeal to most old house lovers; and the historic patina was enticing too. Couch wasn’t the only big name in the house pedigree. Amos King, who owned land that would become part of Washington Park and the neighborhood surrounding it, built the house as an investment property. Five years later, in 1890, Joseph Bergman, a Jewish butcher, and his family moved in. Bergman lived in the house until his death at the age of 86 in 1916. His heirs lived in the house until 1967.

In 1984, Jerry and Ben purchased the house. Ben was initially reluctant to leave the house in the Belmont neighborhood, but gave in after a few months. Having stayed in the Bergman family for 77 years, the house was generally well preserved, but modernizations over the years called for restoration. Jerry and Ben reproduced plaster ceiling medallions, replaced doorknobs and other hardware, and tackled extensive wood graining throughout the house. Jerry and Ben only lived in this home for a few years. It was the last house in their collection. Mahaffey Fine Art prints was located in the building for about two decades and the house is once again a private residence owned by Brittany and Paul Baxter, who previously lived in a 100 year-old house in New Orleans.

Like many stories about brilliant, creative gay men, the approach of the 1980s in the timeline makes us hold our breath. And that is true here too. Ben Milligan was diagnosed with AIDS in April of 1986 and Jerry Bosco was diagnosed a year later. Jerry passed away in October of 1987 and Ben in August of 1988. Both men used the precious time they had at the end of their lives to create an organization that would support educating people about our architecture here in the Northwest. Together they built an exceptional collection of architectural artifacts that now comprises one of the few museums in the country dedicated to architecture. The proceeds of the sale of their real estate holdings helped bring about the creation of the Bosco-Milligan Foundation. Their vision evolved into the present-day Architectural Heritage Center with exhibitions, lectures, an extensive walking tour calendar, and resources for novice and professional old house lovers alike. So this valentine is for Jerry and Ben, along with a note of thanks.

Thanks also to Val Ballestrem, AHC Education Manager, for help with the research on the Urban Lives, Old Spaces pieces.

You can learn more about Jerry Bosco and Ben Milligan and the preservation movement in Portland from the 1950s-1980s in a new permanent AHC exhibition that will open in 2023. 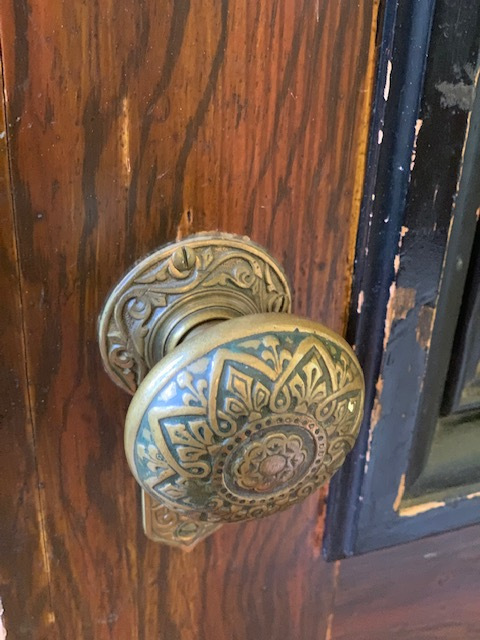