Urban Lives, Old Spaces: Message from the beyond

We were heading downtown over the Burnside Bridge when I looked across the street at a mural of yellow post-it notes on the huge storefront windows of the R.J. Templeton Building spelling out the phrase, “OK, BOOMER.” I told my husband, who was driving at the time, that I’d just heard about the meme. Then I told him what a meme is. The office dwellers in the R.J. Templeton building managed to post this pop-culture wink at the exact right moment–just as a broader audience was starting to get the joke–and even better, they took it down before it became tired. 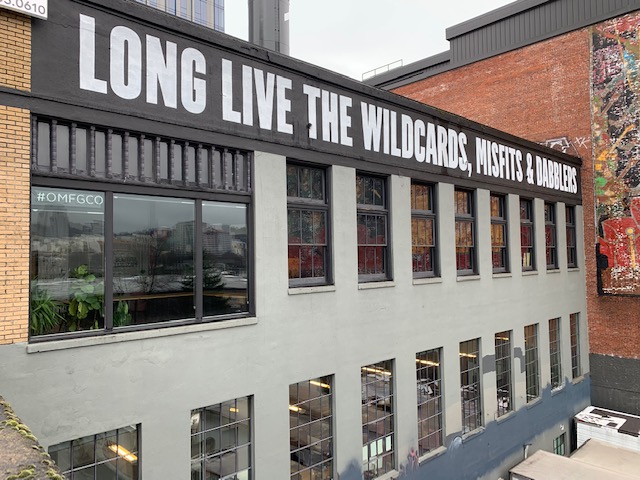 Turns out, speaking to the moment is what they do. Matter Supply Co., one of several creative businesses in the building, is a digital product design and development studio. They posted the Boomer sign on their windows on the east side of the entrance. Murals often also appear on the west window offices of the branding studio OMFGCO, another tenant. OMFGCO’s most visible branding of the R.J. Templeton building is the painted signage across the west side of the building that’s visible to drivers and pedestrians crossing the Burnside Bridge. It’s a rallying cry in all capital letters: “LONG LIVE THE WILDCARDS, MISFITS & DABBLERS.” This is a bold and creative vision of Portland painted on a building that’s perched on the Burnside Bridge and had a literal view of the city through the Great Depression, Prohibition, and even our current pandemic.

The building was designed by notable architects William Knighton and Leslie Howell for Oscar Heinz and completed in 1929. It’s listed on the National Register of Historic Places as the Frigidaire Building because it was first designed as a retail outlet and warehouse for Frigidaire, then a subsidiary of General Motors. The building is next to the Burnside Bridge, which opened only a few years earlier in 1926. The Burnside Bridge was the first of the Willamette River bridges to benefit from the impact of the City Beautiful Movement, an effort in the early decades of the 20th century to improve the appearance of the American urban environment. Gustav Lindenthal, the bridge’s engineer, cared about looks because he said that Portland’s bridges were the ugliest he had seen. 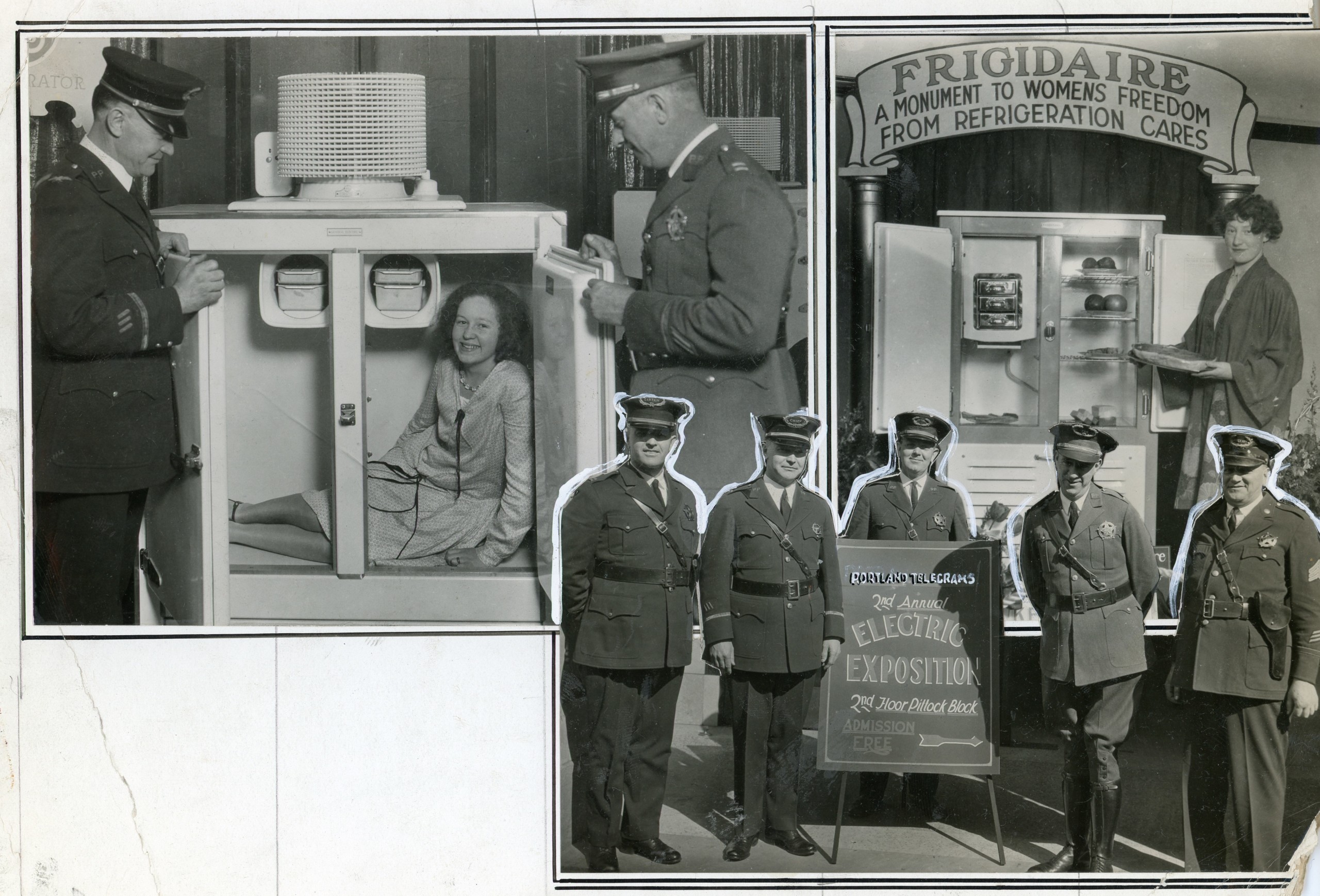 Fridgidaire photo collage for the Portland Telegram newspaper, c. 1929, from the AHC Collections.

The Frigidaire building had to be an unusual shape given its position next to the bridge. The top half of the building, with the retail showroom and offices, had its entrance off the bridge sidewalk, while the lower floors were for the warehouse and loading dock. Home refrigeration was first invented in 1913, but when Frigidaire introduced the first self-contained unit in 1923 and freon was introduced in the 1920s, the market boomed to serve more households. Even though the Great Depression slowed most other businesses, the market for refrigerators stayed hot. As this ad shows, Frigidaire marketed their products as essential for modern life–”A Monument To Womens [sic] Freedom from Refrigeration Cares.” In the middle of 1933, GM-Frigidaire created a new distribution system and closed the Burnside building location. But before leaving 230 Burnside Street, Frigidaire placed an ad after the end of Prohibition featuring the product people could now stock in the fridge: BEER! 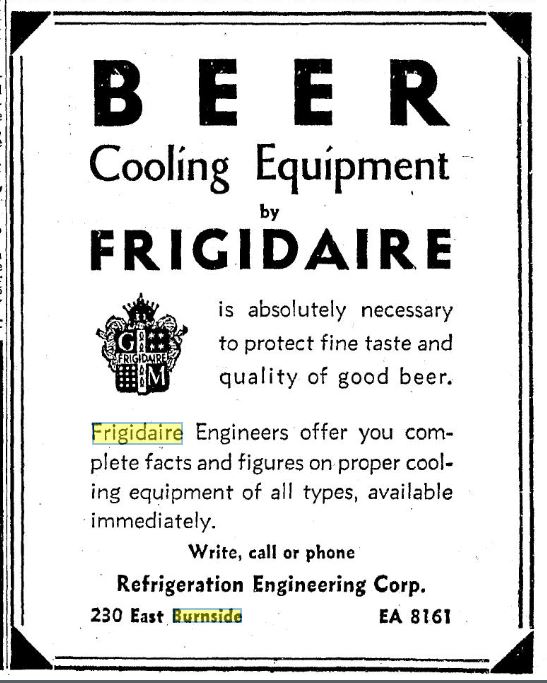 Frigidaire ad from the AHC collections.

The next occupant of the building was a distribution center for the newly formed Oregon State Liquor Control Commission (OLCC). This state government agency was created in 1933 after the national prohibition ended. The OLCC has the authority to control the distribution, sales and consumption of alcohol through the regulation and licensing of those who manufacture, sell or serve alcohol in the state. The distribution center was housed at 230 Burnside for approximately 25 years. Long after the OLCC left the building, Oregon voters passed Measure 51 allowing recreational Marijuana in 2014 and OLCC began regulating cannabis as well. In 2021 they kept the acronym OLCC, but became the Oregon Liquor and Cannabis Commission, to reflect the impact of the growing industry on the state. As Paul Rosenbaum, OLCC’s Chair stated, “The cannabis industry in Oregon has become a billion dollar business and changing our agency name reflects our role in generating revenue to fund state programs.” 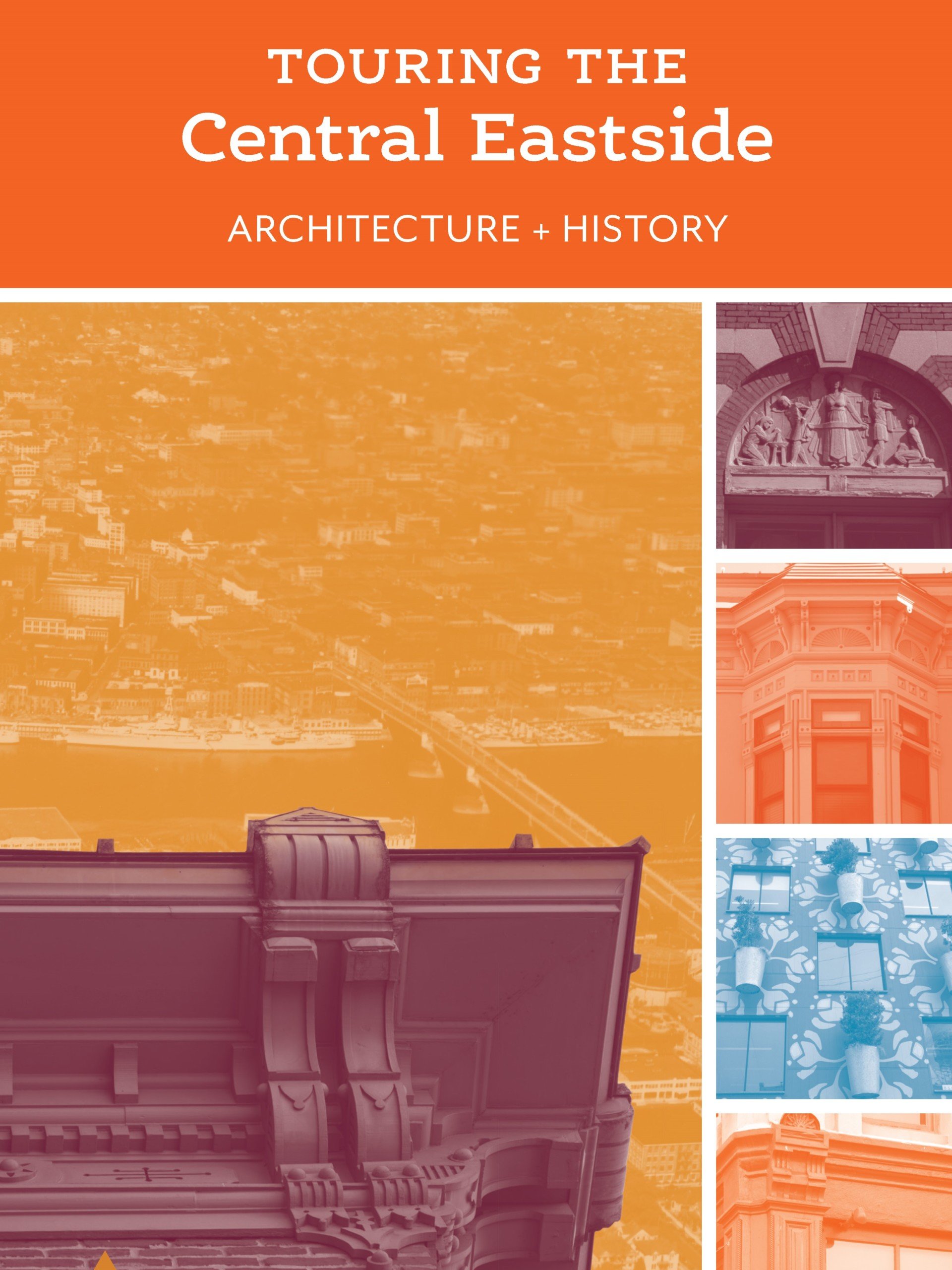 The R.J. Templeton building is part of the AHC’s new guidebook, Touring the Central Eastside: Architecture + History! Read the history of the hotels, businesses and buildings from the 1880s to the present. Guide will soon be available at the AHC, Central Eastside businesses, and hotels.

R.J. Templeton Associates, an auto-parts distributor, was the next occupant of the Burnside building. The name R. J. Templeton is still there on the elaborate bridge-facing entrance and the property is known as the R.J. Templeton building. Artiste Lofts bought the property in 2004; it’s been used as an event space, including for the Wieden + Kennedy 24 party where The Roots played; and later the arts group Disjecta utilized the space, but it is currently reimagined as creative commercial offices. Current tenant OMFGCO sees the importance of context and history in their work with clients and in the built environment:

Understanding context and relevancy continues to guide us today in designing identity systems that resonate with people. Working in a building with so much character, natural materials, history, and iconic landmarks around has certainly helped keep our employees inspired…The stunning views of Downtown, the West Hills, many of Portland’s iconic bridges, and the notorious Burnside Skate Park doesn’t hurt. – OMFGCO Studio Manager

Like many offices, this one has been empty during the pandemic while employees work from home. But the building has continued to send out a message of solidarity, protest, and spirit to all who walk or drive by on the bridge where thousands of people marched after George Floyd was killed: a window mural of a single raised fist in black construction paper and post-its, again by the folks at Matter Supply Co. That message still seems right for the moment. 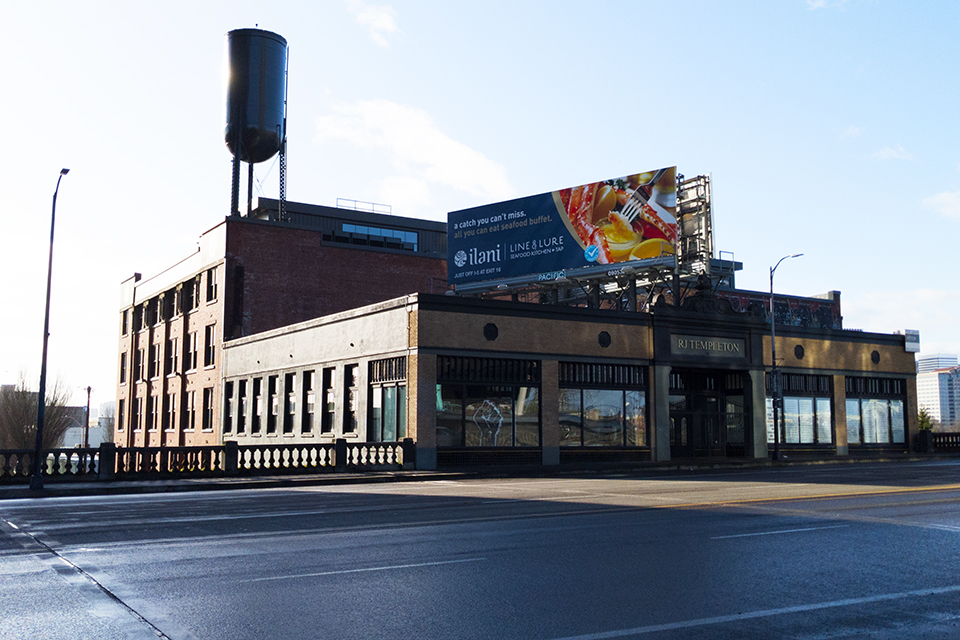