Urban Lives, Old Spaces is a new blog series that chronicles the shifting lives of historic spaces and how the built environment connects with contemporary issues in our lives. Featuring a different space in each blog, guest writer Lainie Ettinger will look at the resilience of historic places and the changing role they play in making Portland more livable, equitable, and sustainable.

Two historic buildings downtown have in fact been home to the Martha Washington Hotel, which was conceived as safe housing downtown for women moving to Portland in the early 20th century. The purpose of the two Martha Washington buildings has remained housing, but the accommodations have changed with shifting needs of our city’s center in the past century. 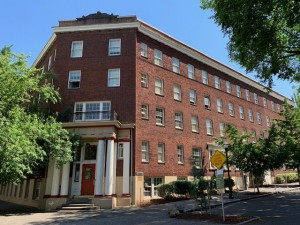 Coming to a new city can be rough–especially for single young women over one hundred years ago. The Portland Women’s Union formed in 1887 to provide a respectable, safe place for self-supporting 18-26-year-old women to live as they became settled with jobs or until they married. The Union began with 100 members including prominent society leaders such as Georgiana Pittock who were motivated by a public lecture by Dr. Emma Welty urging citizens to protect young women arriving in Portland from resorting to prostitution due to a lack of safe housing and employment. The Union first ran a boarding house known as Anna Lewis Hall at 510 NW Flanders streets for twenty to fifty guests. But the need continued to grow, as did wait lists, which reached 600 names by 1909.

Portland was booming in the years after the 1905 Lewis and Clark Centennial Exposition and the population of the city doubled. Smaller houses and buildings were replaced throughout the downtown area with larger apartments buildings, retail establishments, banks, and civic cornerstones. Men came to the city with the influx of new jobs and opportunity; women came too, and they needed places to live. In 1911, the Union purchased the quarter block at the corner of Southwest Tenth Avenue and Montgomery Street for the construction of the Martha Washington Hotel for Self-Supporting Women. The building was constructed and opened in 1917 with a price of $90,000. Union members Anna Lewis Mann and Rosa Burrell (the Union’s first President) were the two lead donors at $15,000 and $10,000 respectively; the Union raised $35,000 and borrowed the final $30,000. To design their new building, the Union hired the best architect in town.

A.E. Doyle was a leading architect in Portland for 20 years. He designed the Multnomah County Central Library (1913), the  Meier & Frank building (1909), Multnomah Falls Lodge (1925), and many of the buildings of Reed College (1912-23). The original Martha Washington Hotel at 1802 S.W. Tenth Avenue is simpler than most of Doyle’s other buildings. The U-shaped red brick Georgian building is four stories with decorative features including an angled entrance with a two-tiered portico and a second entrance with entablature at northwest corner.  It housed ninety residents when it opened and also included classroom and gathering spaces for the young women. Residents of the Martha Washington were nurses, teachers, secretaries, and students. Over the years, the rules and age limits changed with the different eras. During the Great Depression, there were looser rules, lower rents, and older women allowed; During World War II, many of the residents worked in the war effort and women over 30 were asked to leave. With extensive wait lists, by 1953 the age restrictions were enforced from 18-20 years old with a one-year extension for students. And strict rules about no men upstairs became unpopular in the late 1960s. In 1969, Portland State University was growing and needed additional housing for its students and the Martha Washington Hotel was near the center of campus. The Portland Development Commission bought the building from the Union for campus housing and Montgomery Court, as it is now known, is one of the oldest dorms on campus.

With the proceeds from the sale of Martha I, the Union purchased another building in 1969, known as the Campbell Court Hotel, at 1115 SW 11th avenue and dubbed it the Martha Washington Hotel. Campbell Court was constructed in 1923 as a four-story residential hotel and was designed by architect Herbert Gordon. Unlike A.E. Doyle, Gordon was more of a developer than an architect and had no formal training in architecture. The property owner was Jean Campbell, who also managed the building. It’s listing on the National Register of Historic Places categorizes it as Georgian Colonial Revival and a superior example of a residential hotel. The style emphasizes symmetry and draws inspiration from the late Renaissance and Enlightenment periods with strong references to classical architecture. The combined effect of the red brick, the stately façade, and embellishments such as the portico and bay windows were designed to convey “class” and respectability. Yet the secondary spaces within the building featured much simpler finishes and details. When Campbell Court became the Martha Washington Hotel, the average length of stay was nine months with a 3-year limit on residency; closing hour was 10 pm (with 10:45 pm lights out); and there were 141 residents with a wait list. By the 1980s, the wait lists were gone  and the Union struggled to fill the average of 40% vacancies Times had changed; Young women no longer wanted to live in a building with such restrictive rules about behavior. After an internal debate within the Union that spilled into the local newspapers, the Portland Women’s Union decided to sell the Martha Washington and  use the proceeds to support women through a foundation. They sold the building to a now infamous Rajneesh group.

In January 1983, the Union sold the Martha Washington to the Rajneesh Investment Corporation for $1.4 million. As collateral for the sale, the Rajneesh offered 3 Rolls Royce automobiles. The Rajneesh were a spiritual organization with a free-love philosophy led by the guru Bhagwan Shree Rajneesh. While the focus of the group’s activity was in Antelope, Oregon, the for-profit arm of their business was in Portland. The plan for the new Hotel Rajneesh was to rent out the majority of the rooms and to house one-third of the cult’s followers who worked in downtown businesses owned by the Rajneesh, such as the Zorba the Buddha nightclub at southwest ninth avenue and Salmon Street (the current location of Southpark Seafood). In July 1983, mere months after the Rajneesh bought the hotel, it was bombed by a religious fundamentalist group. Stephen Paster, who was convicted of placing the three bombs, lost some of his fingers in the blast and was the only person injured. He served five years in the Oregon State Penitentiary.

Modern Martha: Helping those in Need

By 1987, Multnomah County owned the hotel and used it as a restitution center for low-risk county offenders until 2003. Then in 2010, the Martha Washington re-opened as low-income housing run by Home Forward after a complete sustainable-design renovation. The late Commissioner Nick Fish said at the time that the re-opening of the Martha Washington was a big step in the city’s 10-year plan to end homelessness. The Martha has 108 studio and 1-bedroom apartments, 50 of which operate as Permanent Supportive Housing (PSH) serving chronically homeless and mentally ill individuals. 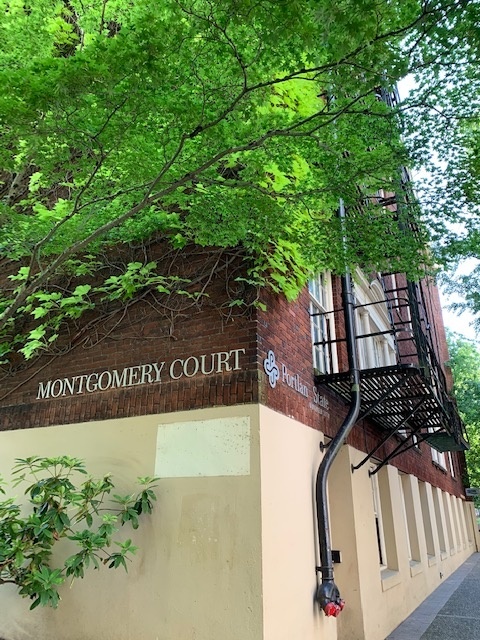