After five years of fundraising and careful planning, the Bosco-Milligan Foundation, with Robertson, Hay & Wallace as general contractor, began the Phase I restoration work in 1994 on the West’s Block Building. The plans, drawn by William J. Hawkins, FAIA, were to restore the original “storefront” – the first floor of the Grand Avenue façade. Cast iron from another building which had been applied by Bosco & Milligan was removed, and other alteration materials were stripped away.

With the work well underway, a significant challenge arose: the wooden horizontal beam behind the belt cornice required replacement due to major dry rot. However, contemporary building codes prohibited the use of wood for this purpose and requiring a steel replacement. No problem…except that all of the brick on the second story of the façade sat directly on top of the beam. Back to the drawing board. The BMF board and staff decided to tackle the entire façade, and because scaffolding was needed, it made sense to go all the way to the top of the building, including the roof cornice. The project, estimated to cost $150,000, would ultimately cost $291,279, of which 23% was contributed in labor, materials, and services.

In 1989, architect Al Staehli was engaged to undertake a rigorous analysis of the multiple layers of paint on the building’s exterior. A microscopic analysis determined the first paint colors, under nearly a dozen layers of colors in some areas. The woodwork was no problem. Because the original soft brick had been painted so many times, the project team knew that removing all of that paint to return to original red brick would badly damage the face, and never result in a clean surface. Repainting the brick in red appeared to be the best solution. 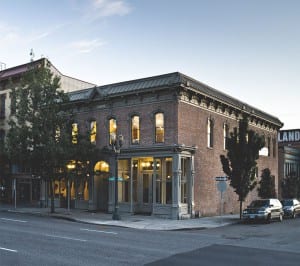 In one of many creative steps, RHW’s Ian Robertson had a brainstorm one morning. He said “How often do we stand inside the building at look at the clean interior brick surface…why don’t we just take down, clean, and flip the brick?” RHW removed a brick at the south wall, adjacent to the N.K. West Building to confirm that the West’s Block exterior had not been painted for at least its first decade. Ian consulted with Pioneer Waterproofing’s Tom Crawford, our masonry contractor, who said that while this had never been done on such a large scale, there was really no reason why it shouldn’t work. All of the brick was taken down and cleaned, and then re-laid to expose the clean interior surface. While the brick was “away”, the galvanized metal label moldings at the windows were removed and stripped of paint by RCI Architectural Sheet Metal and structural plywood and steel were applied on the façade. The many layers of paint on the ornate roof cornice were burned away by A-1 Custom Paint Removal.

The badly-damaged original standing-seam metal roof was replaced to match the original, with donated materials from Pacific Metals. With the structural plans of Steve Pierson, James G. Pierson Structural Engineers, the 1883 building’s Phase 1 work now met the current seismic code. The original storefront entry elements were carefully reproduced in consultation with Dave Talbott’s Architectural Reproductions, and the façade now looked as it had when originally built in 1883.

With that work completed in 1996, Mike McCary – who had operated McCary Art Glass inside West’s Block while the work proceeded – decided to move into his own property. The Bosco-Milligan Foundation relocated its office into the corner storefront, with a decidedly still deteriorated “rustic” interior and continued fundraising in earnest for the major work that remained.

The careful investigation of the West’s Block Building continued for the interior and the rest of the exterior. Finally, with a good portion of the necessary restoration funds in hand or pledged, in Fall 2002 the Foundation moved its office operations into downtown space generously donated by John Russell, Russell Development Company, clearing the way for the building’s full transformation.

With West’s Block fully vacated, construction budgets and contracts were finalized for full start, as building permits made their way through city reviews. Asbestos had been removed in the basement and in various floor tiles throughout. Specialized design work for mechanical systems was done by Harder Mechanical, and electrical systems by McCoy Electric – both partners from the Phase 1 work. Well-known facilities lighting expert Benya Lighting Design agreed to donate lighting design services, and long-time supporter Rejuvenation offered to donate all of the building’s lighting. Other earlier partners also stepped in – Pacific Metals and Anderson Roofing, RCI Architectural sheet Metals – to complete the standing-seam metal roofing on the north façade, and Pioneer Waterproofing completed the larger and impressive “brick flip” on the rest of the building’s walls.

The dilapidated original stairway between the main and second floors was largely intact, except for the lower treads that had been removed in the 1950s when the upper floor was sealed off from use. The historic stairway was carefully restored to its original appearance. New spindles were turned to match the existing ones for the second floor balustrade, which needed to be raised to meet the requirements of the Americans with Disabilities Act. Missing handrails were reproduced for the entire length of the stairway.

Wood Floors in the Hallway 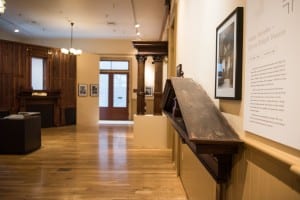 The original wide plank flooring in West’s Block upper floor remained, but a century had taken its toll; years of water damage had left gaps in the tongue-and-groove joints, and floor boards were badly cupped and missing in places. The building team was not optimistic. In the end, the skill of C.Z. Becker Wood Floors led to meticulously matching missing flooring with boards from other partial spaces, and sanding and finishing them to their historic character. Carpeting in the hallway (and the stairway and reception area) was donated by Brintons to preserve the wood floors from on-going wear and tear. The Architectural Heritage Center’s classroom floors were covered in Marmoleum, a “green building” material, through a partnership of the manufacturer, distributor, and supplier Environmental Building Supplies (now Ecohaus.)